'I shouldn't really say this" – my interlocutor was a key member of the Greek parliamentary left – "but we need a Chirac. Where is De Gaulle? Where is Chirac. Where is the leadership going to come from to get us out of this?" The question goes to the heart of the way Greeks see the crisis: now their austerity plan has passed in parliament, the absence of strategy at a eurozone level is where the risk lies.

The austerity package buys immediate respite in the form of a €12bn tranche of bailout money this weekend. But without honest answers to the question of how much Greek debt is to be written off, and by whom, the threat of a chaotic downfall will be ever present.

As I have pushed my way through the rioting throngs these past two weeks, there has been an insistent theme to the comments: "This is coming to you: you're next. Italy, Britain, America – everybody's in the same condition."

Technically this is not true: Greek debt is junk, governance is teetering, popular morale close to broken. But while markets will only insure Greek debt for 60% of its value, the threat of even the slightest downgrade for Britain or the US remains just that, a threat.

But it has dawned on me, scurrying through clouds of teargas and slipping on blood, that the protesters are on to a bigger point. The governance dysfunction we see in Greece is replicated at a higher level in Europe; and the solvency threat in Greece does pose survival-level issues for the currency itself. 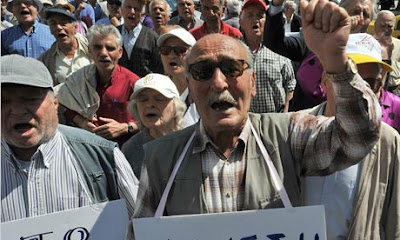