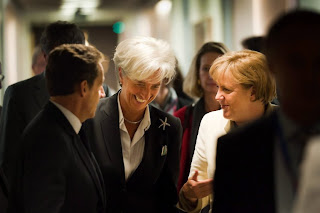 Euro-zone leaders have acted, and a package of new aid for Greece has calmed financial markets. But Thursday's emergency summit raises new questions about the future of the euro -- and the structure of the euro zone itself.

This time, at least, European leaders can't be accused of doing too little. On Thursday in Brussels, during an emergency summit on the euro crisis, they arrived at an impressively wide-ranging package of measures.

Some decisions were predictable, starting with the second rescue package for Greece that will weigh in at €109 billion. Other decisions were highly controversial until recently -- like the participation of private creditors in the next rescue package, or the sizeable strengthening of the European Financial Stability Facility (EFSF). Only the most radical solutions weren't included: a tough haircut for Greece's creditors or the quick introduction of "euro bonds."

But now the same old questions arise: Was that it? Did we save Greece? And can the rest of the currency union sleep well at night?

The agreements did have their desired immediate effect. Financial markets quieted down, the euro rose significantly, and sinking risk premiums for Greece and other southern European nations suggested a falling tide of speculation against the euro-zone periphery. Jean-Claude Juncker, president of the Euro Group, also said the steady drumbeat of emergency euro summits like the one on Thursday will no longer be necessary.

Still, the agreements contained in the four-page draft communiqué still need to be enacted. At least three points are bound to cause some suspense: Greece's short-term non-payment of debt, economic development, and the effect of the country's debt on the rest of the euro zone.