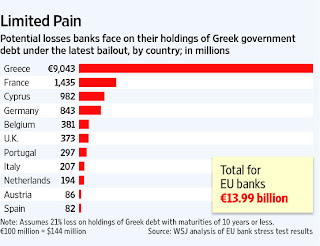 The 90 large European banks that were subjected to European Union stress tests could face total losses ranging from €7 billion to €14 billion ($10 billion to $20 billion), the analysis found. Those losses stem from a provision of the €109 billion bailout that would swap Greek government bonds that come due between now and 2020 in exchange for new securities that don't mature for decades.

The expected losses, nearly two-thirds of which are concentrated among Greek banks, are far smaller than many analysts and investors had feared. Concerns about banks suffering severe losses if Greek defaulted on its debt have been ricocheting around the Continent for more than a year. But the losses likely to be realized under Thursday's bailout will hardly dent most banks' capital buffers.