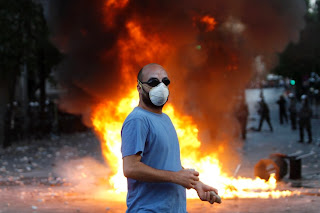 Foreign governments have reacted with relief to the Greek parliament's vote in favor of a far-reaching austerity package. But demonstrators in Athens responded to the news with rage amid brutal clashes with police. Prime Minister George Papandreou can expect further resistance to his reforms.

At the moment when the largest austerity package in Greek history was being passed, it was relatively quiet on Athens' Syntagma Square. Demonstrators sat on the ground, their shoulders slumped and heads down, smoking, chatting and drinking water from plastic bottles. They looked resigned, even while their leaders were still calling for an uprising.

Then all hell broke loose.

The Greek riot police hurled tear-gas grenades into the crowd from left and right. Rubbing their eyes, people started moving -- running, stumbling, unsure which way to go, only wanting to get out and reach safety. Many started shouting. Others, gasping for air, looked for their friends. A young woman yelled: "Help me!" Meanwhile, the rain of stones, bottles and tear gas grenades continued amid the chaos.