Greece is saved! But for how long? This week's votes in Parliament will allow euro-zone ministers, meeting on Sunday in Brussels, to discuss a new bailout for Greece, to pay out a slug of new money from last year's rescue and avoid an immediate payments crisis.

But every three months from now on risks a replay of a nail-biting drama.

Releasing more bailout funds will require the International Monetary Fund and European institutions to vouchsafe that Greece has not fallen short of its privatization and austerity pledges and the IMF will have to maintain that Greece's mountainous debt burden is sustainable. Even European optimists are not pretending that the deal has done much more than buy time.

The usual wisdom has been that there's a virtue in buying time. The longer the delay before the country's debts are fundamentally restructured, the more time banks and other financial institutions have to strengthen their balance sheets against losses, and the less the wider fallout.

Time also is supposed to ring fence Greece from other vulnerable economies in the euro zone, allowing other bailout recipients, Ireland and Portugal, to put their economic programs are on track. 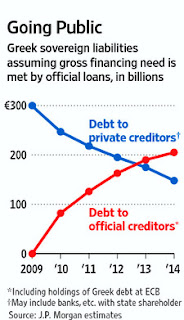