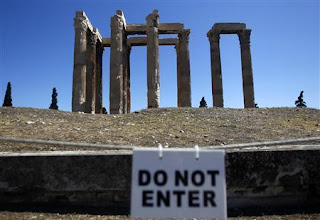 Moody's cut Greece's credit rating further into junk territory on Monday and said it was almost certain to slap a default tag on its debt as a result of a new EU rescue package.

It was the second rating agency to warn of a default after euro zone leaders and banks agreed last week that the private sector would shoulder part of the burden of a rescue deal that offers Greece more cash and easier loan terms to keep it afloat and avoid further contagion.

"The announced EU program along with the Institute of International Finance's statement implies that the probability of a distressed exchange, and hence a default, on Greek government bonds is virtually 100 percent," Moody's said in a statement.

Moody's cut Greece's rating by three notches to Ca, just one notch above default, to reflect the expected loss implied by the proposed debt exchanges.

Greece now has the lowest rating of any country in the world covered by Moody's, which, like Fitch last week, said it would review Greece's rating after the debt swap is completed.

"Once the distressed exchange has been completed, Moody's will reassess Greece's rating to ensure that it reflects the risk associated with the country's new credit profile, including the potential for further debt restructurings," it said.

However, whereas Fitch pledged to quickly give Greece a higher, "low speculative grade" after its bonds had been exchanged, Moody's said it could not forecast when the rating would change or how.

"It all depends how quickly the debt exchange takes place," said Alastair Wilson, Moody's Managing Director for EMEA Credit Policy. "Once we have greater visibility over that, we will reassess the credit profile quite quickly. Whether the rating will change, that's a different question," he told Reuters.