In Greek Pact, Compromises and Intrigues 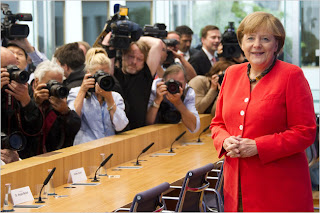 The latest bailout in the Greek rescue has all the elements of what is fast becoming almost commonplace European intrigue.

The French president arranges a private summit meeting with the German chancellor. Europe’s top central banker resists calls to allow Greece to write off some debt, fearing it could undermine the euro. The Greeks cry out that their sovereignty is infringed.

And only when markets teeter toward panic is a deal finally reached in Brussels to stave off more attacks on the euro zone’s vulnerable southern countries and prevent, for the moment at least, a broader run on financial markets.

The dramatic elements in the latest round of messy European compromise are not in themselves new. The question is whether the deal reached Thursday for another Greek bailout, this time valued at $157 billion, and relief for Portugal and Ireland is a decisive step to calm Europe’s financial storm or simply postpones another reckoning for the weakest southern European economies and the euro itself.

More
Posted by Aristides N. Hatzis at 9:41 AM