How much closer a union? 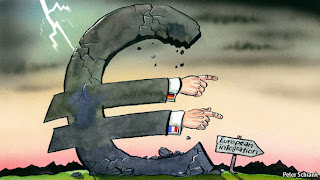 At the emergency meeting of euro-zone leaders on July 21st Jean-Claude Trichet, president of the European Central Bank, circulated a set of charts showing how bond spreads had blown out after every summit over the past year. He also handed out a ranking of countries deemed by markets most likely to default: Greece, Portugal and Ireland were at the top, riskier than Venezuela and Pakistan; Spain was less safe than revolutionary Egypt. Mr Trichet’s point was clear. The response to the crisis had been inadequate and often made matters worse, with markets seeing Europe as more of a basket-case even than Africa.

The leaders were determined to reverse this grim trend. So they agreed to slash interest rates on bail-out loans for the most crippled members, and to double their maturities to 15 years (and, if need be, be ready to double them again, to 30 years). The summit promised to keep up the subsidies until Greece could return to the market. Ireland and Portugal got the same terms. Greece’s private creditors were asked to pay, but only a bit.

To limit contagion, the leaders gave enlarged powers to the European Financial Stability Facility (EFSF) to extend short-term loans, recapitalise banks and buy bonds of troubled sovereigns in the markets. To France’s delighted president, Nicolas Sarkozy, this was the birth of a European Monetary Fund. The markets were pleasantly surprised, even euphoric for a while. Finally, said some analysts, euro-zone leaders were taking the bold steps required. But those taking off on their summer holidays would be wise not to switch off their mobile telephones. Spain and Italy, in particular, have been wobbling yet again this week.