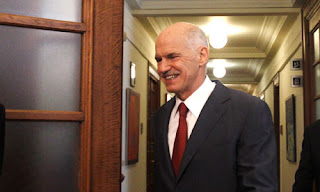 Mired in recession and deepening poverty, Greece hailed the Brussels deal as a historic step that offered the first glimpse of hope in a crisis that has dogged the country for 18 months.

"Our people have been released from the nightmare of bankruptcy," the socialist leader enthused before explaining the finer details of the complex €109bn (£96bn) rescue plan to his cabinet ministers. "We were on the verge of the abyss but we didn't waver. We made big sacrifices but they didn't go to waste. We achieved historic decisions. Europe took a historic step forward."