A truthful sales description for Greece’s Public Power Corporation (PPC) would highlight the challenges facing Evangelos Venizelos, the country’s finance minister, as he embarks on an ambitious privatisation programme demanded by the European Union and International Monetary Fund.

Under Greece’s bail-out programme – fast-track implementation of which was approved on Thursday – some €50bn of privatisation revenues are expected by 2015.

The sale of a 17 per cent stake in PPC, currently 51 per cent government owned, is on a long list of possible disposals that also includes stakes in other state utilities, concessions to operate airports and ports, and leases on state property and real estate for tourist development.

However, setting ambitious targets for privatisation proceeds will be much easier than achieving them. PPC is a case in point. 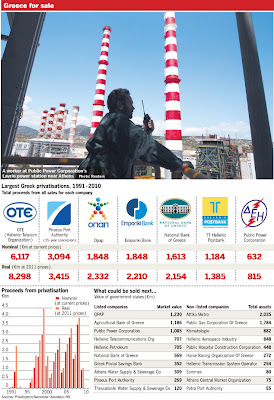