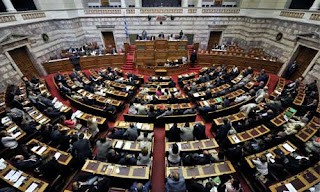 Greece's chances of avoiding a catastrophic disorderly default appeared to improve on Thursday as the Greek parliament approved the second stage of its €28bn (£25bn) austerity plan, and Germany announced that its banks will support a new bailout package.

After heated debate, MPs narrowly voted in favour of an enabling bill that gives Greece's government the authority to implement the package of deep spending cuts and hefty tax rises that was approved in principle on Wednesday. The legislation was carried by 155 votes to 136.

Greece is now expected to receive €12bn in immediate aid from the International Monetary Fund, the European Union and the European Central Bank.

Herman van Rompuy, president of the European Council, swiftly welcomed the result, which also eases the way towards a second bailout package, likely to be worth around €110bn. "This was the second, decisive step Greece needed to take in order to return to a sustainable path. In very difficult circumstances, it was another act of national responsibility," he said in a joint statement with European Commission president José Manuel Barroso.