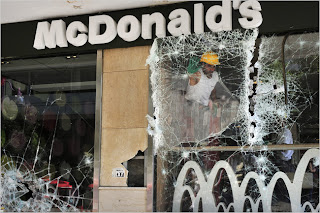 Greek lawmakers voted Thursday to speed the enactment of the country’s new austerity measures, clearing the way for foreign lenders to make available the next installment of aid needed to meet the government’s expenses through the summer.

The vote followed a more significant milestone on Wednesday, when Parliament narrowly approved a package of spending cuts and tax increases, along with the sale of government assets, as protesters battled the police in the streets surrounding Parliament.

The complex bill to carry out the austerity measures passed Thursday, with all 154 of the governing Socialists plus one conservative deputy voting in favor. There were 136 votes against it, along with 5 blank ballots and 4 abstentions. The center-right New Democracy Party opposed the bill in principle, as it had the measures themselves, saying they called for too much austerity and would make it more difficult for the Greek economy to grow.

With Thursday’s vote, the spotlight will now shift to Greece’s foreign lenders — the European Union, European Central Bank and International Monetary Fund — which are expected to unlock $17 billion in aid that the country needs to meet its debt obligations through August.