Greek MPs vote on next stage of austerity plan 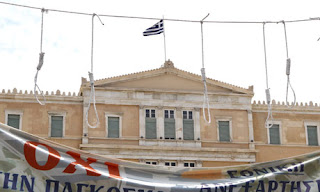 The battle to prevent Greece lurching into disorderly default continues as lawmakers return to the Athens parliament on Thursday to approve the next stage in the hugely unpopular austerity package.

Having approved the €28bn (£25bn) programme of fresh taxes and cutbacks in principle on Wednesday, Greek MPs will vote on an enabling bill giving the government authority to implement the new measures speedily. Analysts are broadly confident that the legislation will pass but are still unconvinced that George Papandreou's administration can actually implement the tough measures in the face of deep public hostility.

"If we wanted to be cynical, or realistic, we could say that the disaster scenario has been averted for now but we may well be revisiting in three or six months," predicted Gary Jenkins of Evolution Securities in a research note on Thursday morning. Jenkins fears that Greece will fail to make enough progress to placate its European neighbours and the International Monetary Fund (IMF), which it relies on for its funding.