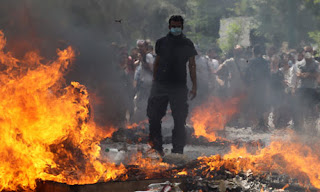 At 4.39pm on Wednesday the Greek parliament approved a five-year austerity plan that could sink or save the country.

Many hoped the vote might end the saga that has kept Europe – and markets across the world – on tenterhooks over the past week.

But no sooner had the MPs cast their ballots and European Union leaders had welcomed the "landmark" vote, the real drama began outside parliament where another approach to democracy saw protesters battle with riot police. The clashes continued into the early hours as MPs return to parliament today to vote on a law that will speed the austerity measures through parliament.