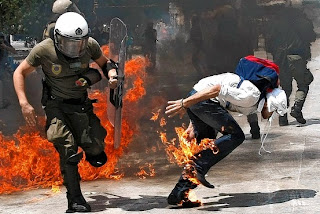 A wave of protests in the Greek capital turned bloody as parliamentarians neared a decision on whether to impose sweeping public spending cuts in exchange for a fresh international bailout aimed at preventing a ruinous default.

Thousands of Greeks demonstrated outside Parliament as lawmakers began a second day of debate on a €28 billion ($40 billion) program of spending cuts and tax increases the country has promised its international creditors. A vote on the measures is scheduled for Wednesday. The demonstrations began peacefully, but later turned violent, leaving more than 40 people injured—including 37 police officers.

The International Monetary Fund—architect of the Greek austerity program and the object of much of the protesters' anger—on Tuesday signaled continuity in its approach to the crisis, naming Christine Lagarde its new managing director. As France's finance minister, Ms. Lagarde played a central role in shaping Europe's response to Greece's worsening problems, in collaboration with the IMF.

Despite Tuesday's violence, the government's majority appeared to be holding. The Socialist government controls a majority of 155 deputies in Greece's 300-member Parliament, but at least four Socialist lawmakers have expressed reservations about the package. 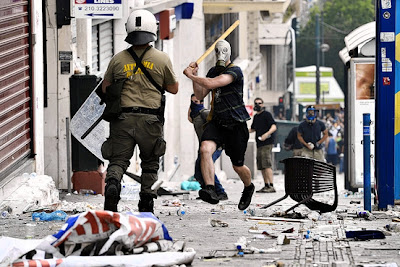 Posted by Aristides N. Hatzis at 8:31 AM