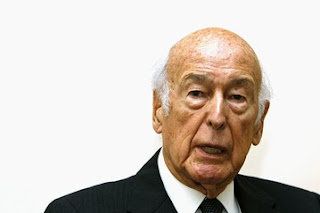 There are some exotic names flying around Brussels for plans to help the debt-stricken Aegean nation dominating the headlines this week — Vienna-style, Brady-bond inspired, orderly restructuring–and now the gallic-flavored “Caisse d’Amortissement” can be added to the list. Named after a French method of buying public debt and placing it an agency initially conjured up in time of Cardinal Richelieu, its heyday was 1930s France and it is currently being used to offset the country’s huge health-system debt.

Former French President Valery Giscard d’Estaing sat down with a small group of journalists after his keynote speech at the ‘State of the Union’ conference here, organized by the former head of the French employers’ association Denis Zervudacki, and elaborated on the themes he covered, including this modern reworking of a French classic for the Hellenic Republic.

A Greek Caisse d’Amortissement would consist of a contribution from the European Central Bank, some of the European Union structural funds currently channelled to Greece, and a Greek contribution funded partly by privatization. It would then buy some or all of the country’s debt, allowing Greece to return to EU deficit and debt limits, and push through the structural changes needed to get its economy on the right path. The agency would then negotiate with creditors, over how, when and to what extent there would be reimbursement of their original investments. For those dreading the “R” word? “Speculators and banks took their own risks when they bought Greek debt,” General De Gaulle’s former protege said.

“It’s unrealistic to add new debt to a burden which is already unsustainable,” Mr. Giscard said. “A coordinated, organized restructuring should not be excluded.”