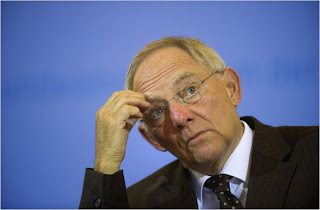 The biggest financial institutions in Germany followed the lead of their French counterparts Thursday by agreeing to roll over some of their holdings of Greek debt — a crucial step toward obtaining international agreement on a second bailout for the crippled Greek economy.

The German finance minister, Wolfgang Schäuble, said in Berlin that banks and insurance companies were “prepared to participate in a second aid program for Greece” as part of a wider European deal.

The news added to the relief in global markets after the Greek Parliament approved laws Wednesday and Thursday enabling new government spending cuts and revenue-raising steps.

But other officials cautioned that a broader agreement on new aid for Greece was far from certain, in part because of requirements imposed by international lenders to ensure that Greece’s debt problems are contained.