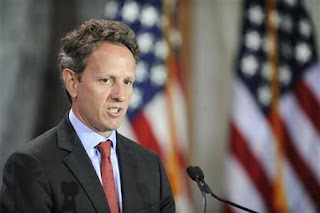 In a statement, the Treasury said the two ministers discussed "Greece's efforts to implement comprehensive reforms and restore growth to its economy. Secretary Geithner welcomed the progress Greece has already made toward strengthening its public finances and underscored the need for continued and full implementation of the program."