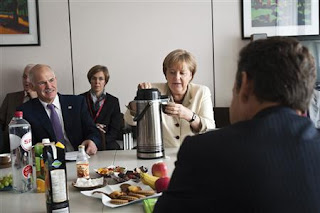 Fitch ratings agency declared Greece would be in temporary default as the result of a second bailout, which Athens said had bought it breathing space.

But the agency pledged to give Greece a higher, "low speculative grade" after its bonds had been exchanged and said Athens now had some hope of tackling its debt mountain, which most economists still expect to force a deeper restructuring in the future.

An emergency summit of leaders of the 17-nation currency area agreed a second rescue package on Thursday with an extra 109 billion euros ($157 billion) of government money, plus a contribution by private sector bondholders estimated to total as much as 50 billion euros by mid-2014.

Under the bailout of Greece, which supplements a 110 billion euro rescue plan by the European Union and the International Monetary Fund in May last year, banks and insurers will voluntarily swap their Greek bonds for longer maturities at lower rates.

"However, the reduction in interest rates and extension of maturities potentially offers Greece a window of opportunity to regain solvency, despite the formidable challenges that it faces," he said.