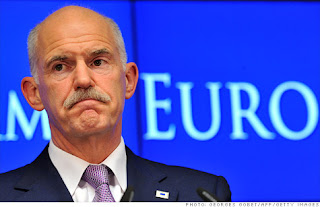 The European Union this week took the boldest step yet to stabilize Greece and contain the threat of a broader debt crisis in the euro zone.

But it remains to be seen if the latest round of debt reduction measures and market backstops will resolve the underlying problems plauging the 17 nation currency union.

"They averted what would have been a meltdown in Europe," said Nariman Behravesh, chief economist at IHS Global Insight. "But there are still some huge challenges ahead."

To be sure, the 109 billion euro aid package for Greece and proposed expansion of the European Financial Stability Fund represent the most significant step the EU has taken to prevent the spread of debt contagion.

The financial markets reacted with sighs of relief, followed by more than a little head-scratching.

At first, investors were heartened by the simple fact that an agreement had been reached. But the size and scope of the rescue effort for Greece was generally larger than expected. The deal involves lowering interest rates and extending maturities on existing bailout loans, as well as more favorable terms for future loans from the EU stability fund.

Markets in Europe rose Friday, but closed below session highs. Shares on Wall Street were mixed as investors digested the news out of Europe and corporate earnings reports in the U.S.

Aside from Greece, the decision to empower the financial stability fund to buy sovereign bonds in the secondary market and provide lines of credit to troubled banks was a hit with many investors.