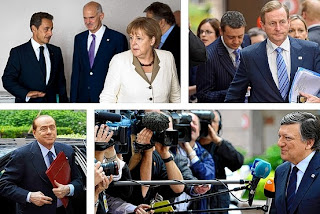 With a new €109 billion ($157 billion) bailout for Greece, European leaders broke from their recent string of slow-paced half-measures to launch a frontal attack on a debt crisis that threatens to engulf the troubled country.

But the greatest test is still to come: Does Europe yet have the tools to block the crisis from spreading deep into the Continent's core?

Economists and analysts broadly hailed the Greece package, which provides the country with much needed long-term cash and places some of the bailout's burden on the shoulders of Greece's private creditors.

Still, details of the plan made plain that it would do little to immediately reduce Greece's huge stock of government debt—leading to fears that Greece could again flare up as the country struggles to meet its heavy burden.

And economists are skeptical that Europe is prepared to head off trouble in other countries. Ireland and Portugal, the other bailout recipients, were given more time to repay rescue loans at a lower interest rate, but saw no other relief. The wider euro-zone bailout fund, given more authority to intervene pre-emptively before a country reaches the verge of bankruptcy, didn't get any more money to do so. 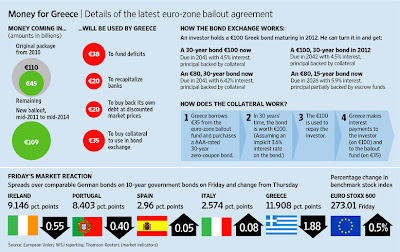 Posted by Yulie Foka-Kavalieraki at 9:25 AM