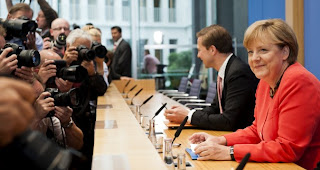 It took a year and a half of politicking that pushed markets to the edge more than once, but Europe’s leaders this week may have reached an elusive goal: Make sure that what happens in Greece stays in Greece.

That was the initial verdict from analysts and investors who said the measures adopted in Brussels on Thursday, including more than $150 billion in fresh emergency loans for the government in Athens, mark an important step in strengthening the euro currency zone.

It isn’t perfect, and there are major open questions about whether, for example, the amount of money committed by euro-area governments so far is adequate to pay for the policies they have approved. Also ahead is a likely default declaration by credit-rating agencies once they review the terms of a plan for banks to contribute to Greece’s rescue, an event European officials now think they can navigate without much disruption.

Taken together, they argue, the new policies make it much less likely that the economic problems festering in Greece will cause a run on financial institutions in Spain, a financing crisis in Italy or a credit crunch in the United States.