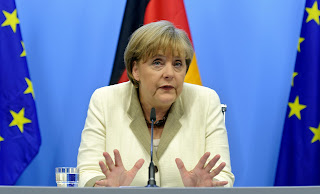 Euro-area leaders fanned out to persuade investors that last night’s array of crisis-fighting measures can help stop the debt turmoil that’s defied them for more than a year.

German Chancellor Angela Merkel said government chiefs had learned from the “systemic effects” in the single-currency area and widened the scope of their bailout fund to allow it to buy the bonds of debt-laden nations, support banks and offer credit lines. The agreement included new aid for Greece that embraced bondholders, prompting Fitch Ratings to say it will put a default rating on Greek debt.

The risk is that the package will follow the pattern of previous agreements and eventually disappoint markets. Leaders declined to increase the 440 billion euro ($632 billion) fund, prompting economists from Citigroup Inc. to Goldman Sachs Group Inc. to question whether it’s big enough to insulate Spain and Italy from contagion. The onus also remains on Greece and other cash-strapped nations to keep delivering austerity measures.

“The European Financial Stability Facility has gone from being a single-barreled gun to a Gatling gun, but with the same amount of ammo,” Willem Buiter, chief economist at Citigroup Inc. told Bloomberg Television’s “The Pulse.” “It needs to be increased in size urgently.”

The EFSF will have about 323 billion euros ($464 billion) to fend off any speculative attacks against Spain and Italy after contributing to Greece’s second aid package, European officials said.