Bazooka or peashooter? Greece’s new bail-out helps, but should have gone further 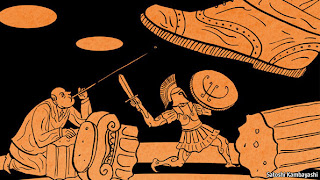 When Henry Paulson, America’s then treasury secretary, readied a plan to prop up Fannie Mae and Freddie Mac, two teetering housing agencies, in the summer of 2008, he spoke of having a “bazooka” in his pocket. In their response to the sovereign-debt crisis, Europe’s policymakers have tended to favour the peashooter. Their latest salvo in defence of Greece on July 21st produced some favourable initial reports, but the bang has faded. In a strange inversion of the crisis to date, the new bail-out plan seems to have helped the weaker peripherals and hurt the stronger ones.

The latest Greek bail-out consists of two main elements. The first is the promise of an extra €109 billion ($158 billion) in official lending to Greece from other members of the euro zone (apart from Ireland and Portugal) and the IMF. Greece will get more time to repay its loans; Europe is also cutting the interest rate it charges Greece, to about 3.5% from 5.5%. In effect, the euro zone is allowing Greece, its flakiest member, to borrow at rates similar to those paid by Germany, its most creditworthy one.

The second element of the plan involves asking Greece’s private creditors to shoulder some of the rescue burden. Bondholders are being asked to choose from a bewildering menu of options under which they can sell bonds at a discount or swap them for 15- or 30-year bonds, either now or when they mature. Under the proposals, which were negotiated with the Institute of International Finance (IIF), a club of the world’s biggest banks, €135 billion in Greek bonds are meant to be exchanged between now and 2020. Combined with official support the plan could allow Greece to steer clear of bond markets for the rest of the decade.