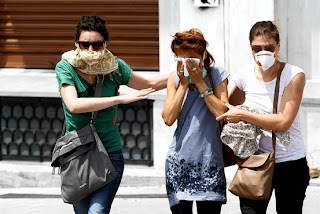 Greece's antiausterity protest movement is down but not out.

The next threat to the protest movement's momentum is Greece's hot summer doldrums.

But nearly everyone here expects the rising social discontent to result in a new wave of protests—by autumn at the latest.

For more than a year now, Athens's central plaza, Syntagma, or "Constitution," Square, has been the battered stage for an evolving social movement against austerity that has gained and lost momentum.

The protests have struggled with internal divisions over the role of violence and over what exactly the alternative to European-imposed austerity is.

But all in Syntagma Square agree on one thing: The country desperately needs another way out of the crisis.