After a Deal, Only More Challenges 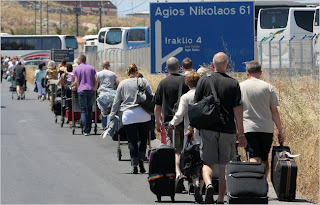 So far so good was the word on Wall Street Thursday as details emerged about Europe’s latest broad, sweeping effort to relieve Greece’s debt burden.

But, analysts said, it was unclear how the ambitious plan — which includes Greece changing the terms of its debt — would affect the markets in the coming days.

The conventional thinking had been that a Greek default would spur contagion in the financial markets, potentially roiling United States banks and mutual funds. But on Thursday, as details emerged of a plan that was characterized as a “selective default,” stocks on both sides of the Atlantic rose. The euro climbed to a two-week high against the dollar. And bonds in Spain, Greece and Italy ticked upward, while bets against Greece’s debt sunk.

What was behind the muted response, analysts said, was that Europe had avoided the trademarks of traditional sovereign defaults, which more typically involve bondholders and creditors taking sudden, definite losses. Greece’s problems are hardly a surprise, having been telegraphed for nearly a year and a half. And many of the losses connected to Greece’s debt, it turns out, will be shared by the euro zone and may not affect investors like United States money market funds as much as has been feared.

“This is the Europeanization of the Greek debt,” said Perry Mehrling, a senior fellow at the Morin Center for Banking and Financial Law at Boston University. “Everyone prefers to have Europe as their counterparty rather than Greece.”