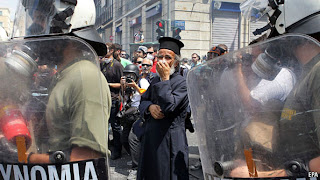 Some years back a Greek finance minister, fed up with his country’s waste and extravagance, claimed that he could save money by shutting down the national railway and driving its passengers around in taxis. He was accused of hyperbole but seems, rather, to have been guilty of understatement. In 2009 the Greek railway collected just €174m ($250m) in fares and other revenues. Meanwhile, it spent €246m on wages and lost a total of €937m.

On June 29th, with tear gas billowing around the rioters outside the Greek parliament, politicians in principle backed a new punishing austerity plan. As The Economist went to press, they were expected to implement the austerity plan in a second vote. That would open the way for the euro-zone countries to approve a second rescue package for Greece likely to be worth around €120 billion.

Alas, Greece’s austerity plan looks doomed to fail. It does too little to prevent the epic folly of Greece’s railways and other ruinous schemes. It will screw down too hard on ordinary Greeks, with new taxes, spending cuts and a rushed privatisation scheme. And it will almost certainly condemn Greece to recession, strife and an eventual debt default.