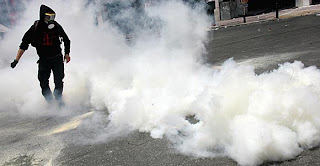 The clashes morphed out of a 48-hour nationwide strike that saw hundreds of thousands of Greeks walking off their jobs and spilling into the streets to protest a proposed austerity regimen deemed necessary for securing further financial support from international organizations.

The violence ripped through Syntagma Square, the iconic plaza of a fed-up and financially distressed capital, as concern mounted over Prime Minister George Papandreou's ability to sway — or strong-arm — dissenters in his fractious party to vote for the measures Wednesday and Thursday.

Failure to pass the $112-billion austerity plan would prompt the European Union and the International Monetary Fund to freeze bailout funds, leaving this sun-kissed Mediterranean country without cash to pay its bills in July. That would push Greece to default on its debt within days, triggering massive financial panic in international markets, analysts warn.

"The stakes are very, very high," said Miranda Xafa, a leading Greek economist and former member of the IMF's executive board. "This is one of the most pivotal moments for both Greece and the global financial system as a whole.

"There really is no alternative, however painful the measures are."