Markets optimistic that Greek austerity bill will be approved 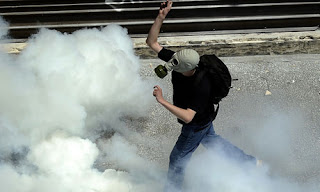 With just a few hours to wait until the vote on Greece's austerity package, the financial markets are quietly confident that lawmakers in Athens will approve the bill.

Stock markets across Asia have risen today, with Japan's Nikkei closing 1.54% higher in the last few minutes at 9,797 points. City traders also expect a positive start in London, with IG Index calling the FTSE 100 up 29 points.

"Alhough the margin [of victory in Athens] is likely to be tight, the consensus does seem to be that it will be passed in favour of the government's proposals and this seems to be sufficient to give trades that lift in confidence that has been lacking of late," said Cameron Peacock, market analyst at IG Markets, in a research note.

The optimistic mood has also lifted the euro to around $1.4375 against the dollar, a rise of 0.3 cents.

More
Posted by Yulie Foka-Kavalieraki at 10:29 AM