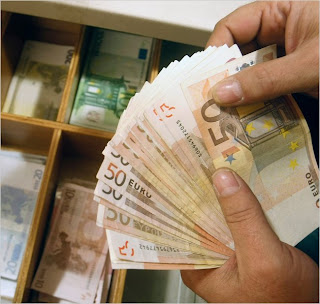 The Greek Parliament is prepared to vote on austerity measures on Wednesday, and its people have been gathering in demonstrations and strikes to protest the cuts. Here is an open letter explaining why members of Parliament would be crazy to vote no:

The anger you feel about your plight is understandable. You are staring at several unpalatable options, all of which will involve big cuts in living standards for years to come. But the choices are not equally bad. You must avoid an emotional reaction that leaves you in an even worse state. And you should ostracize those who resort to violence.

One option is to persuade your politicians to say no to the austerity plan set forth by the euro zone and the International Monetary Fund. That proposal is not perfect. But rejecting it outright would be childish.

If there is no agreed plan, you will get no money. The consequence wouldn’t be just that the government defaults on the loans it took out on your behalf. There would be a run on your banks and an even deeper recession. You would probably also lose your remaining friends in Europe.

Hello.I want say sometihng about greek crisis.I don't beleive this crisis because of greek public and their send a lot money..So why greek people must sale ports etc.Nobody don't damage a public for self-intrest.I know some exam our history.from Ottoman Empaire.How can give debt and what happend at the and of.Nobody say to greek people you must sale your public domain.So greek people right for strike and other action.Nobody buy a nation's destiny like this.People what is eat what is drink how use health servis childer and young people how can go to school.God sees everything.I hope he shows an exit for this economic crisis.mybe greek people accept easly.But two goverments (greek and turkish)sing a treaty againist war until this crisis finished.And this money can use for need money and sallary.I can thing something but I can do sometihng. just I can pray to God for an exit.I wish a correct exit for greek public whole my heart.The last thing.
I hope you can hear Mrs merkel my voice.Please think say something to greek people about sale public domain .there is old and illness people in greece.These people what is eat what is dirnk how can go to hospital how can they live little sallary or money.they need alot of thing before confidence and compassion.you must take good pray from this people not bad pray.God to be with you Greek public.my pray with you.