The I.M.F., Greece and Europe: Who Benefits? 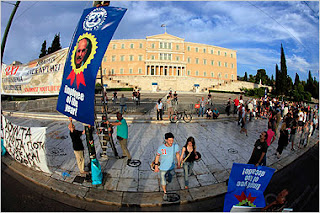 Europe’s finance ministers on Monday said they would hold off in sending a new infusion of aid to Greece until July, demanding that the Greek government first agree to spending cuts and financial reforms.

Greece needs the money to stay solvent. The International Monetary Fund was asking the European Union to effectively keep the Greek government afloat if its financing plan fell short over the next year. A Greek default would be twice the size of the two largest defaults in history put together — Argentina and Russia.

What form should an I.M.F. intervention in Greece take, who stands to gain, and what lessons have been learned from Argentina and other national financial crises?

Get It Over With
Dani Rodrik, Harvard's Kennedy School of Government

More
Posted by Yulie Foka-Kavalieraki at 9:58 AM