How to Fix Greece 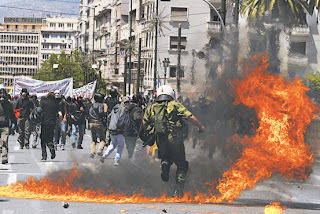 It would require delaying interest payments and an orderly reduction of the total debt by 50%. And with 327 billion euros outstanding, we don't recommend this lightly. Usually, Barron's staunchly advocates full repayment to bondholders. But the choice for Greece's bondholders, as we see it, is to accept 50 cents on the euro now -- or 30 cents or worse down the road.

Failure to restructure will also bring further societal and economic ruin. With Greece's unemployment rate at 15%, biding time until an eventual default could throw the country into depression, incite more unrest and drag all of Europe into deep recession. It could even cause Europe's common currency, the euro, to unravel, and shake the foundations of the European Union itself.

Except for a few brave European leaders who have whispered in recent weeks that Greece get debt relief, Europe's official approach has been to muddle along and hope the problem will go away. It won't.

Last week, in its latest Band-Aid attempt, the government announced new austerity measures that will extract a further €6.4 billion ($9.1 billion) from its reeling economy -- through job and wage cuts, and new taxes -- a desperate effort to make up for missed budget targets set in last year's €110 billion bailout by the EU and International Monetary Fund. 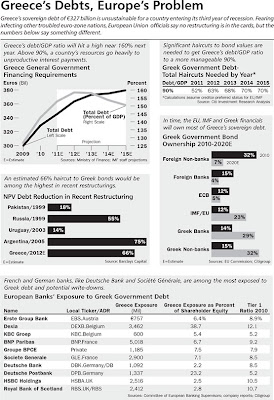 Posted by Yulie Foka-Kavalieraki at 10:54 AM