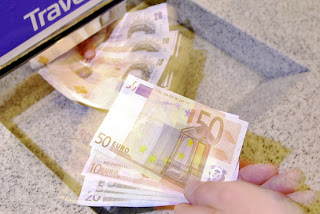 The euro rose Tuesday on investors' growing hopes that Greece would pass austerity measures and avoid defaulting on its debt, while German banks agreed to consider rolling over some Greek government bonds.

Despite new rioting in Athens, Greece's parliament is expected to vote for crucial austerity measures Wednesday. Approval is needed for any future assistance for the debt-laden country.

Another supportive factor for the euro was the agreement in principal by German banks to consider rolling over about $10 billion in Greek government debt, provided there are assurances that the terms of the deal won't be seen by ratings agencies as putting Greece into default.

More
Posted by Yulie Foka-Kavalieraki at 2:49 AM