Greek Reforms 'Like Putting a Band-Aid on a Mortal Wound' 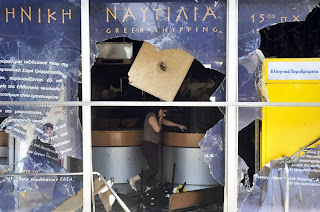 Greece may have averted the worst by passing an austerity package on Wednesday, but the government of Georgios Papandreou will continue to face massive public resistance to its course. German commentators warn that Athens isn't out of the woods yet.

For German Chancellor Angela Merkel, it was "really good news." But many Greeks, it would seem, beg to differ.

The news that the Greek parliament had passed Prime Minister Georgios Papandreou's latest package of austerity measures prompted particularly brutal rioting in the streets of Athens on Wednesday. Demonstrators clashed with police into the early hours of Thursday. Protesters attacked a post office in the Finance Ministry building, while riot police fired tear gas and even threw stones back at demonstrators.

The €28.4 billion ($41 billion) austerity package foresees €15 billion in additional tax revenues over the next five years, combined with savings of over €13 billion through cuts in social benefits and in the public sector. Privatization of state assets will provide an additional €50 billion. The Greek parliament had to pass the package in order to receive the next tranche of aid from the European Union and the International Monetary Fund, otherwise the state would have gone bankrupt within the next few weeks.

The parliament will also vote Thursday on laws relating to the implementation of the austerity measures. Although Wednesday's vote was greeted with relief in the rest of the euro zone, and caused the euro to rise to its highest level against the dollar in weeks, Papandreou will continue to face pressure from the Greek population, many of whom are deeply angry about the austerity program. Resistance from the country's powerful unions is expected, and further street protests seem inevitable.