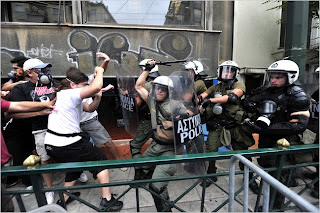 The Greek Parliament backed Prime Minster George Papandreou’s bitterly contested package of austerity measures on Wednesday, clearing the way for crucial international lending to stave off default over the summer. But thousands of Greeks took to the streets in protest, and some clashed violently with police officers, who responded with tear gas.

The vote, 155 to 138, removes a serious obstacle to the release of $17 billion by the European Union, the European Central Bank and the International Monetary Fund, funds the Greek government needs to pay its expenses through the summer. Questions remain about whether the measures would ultimately cure the debt-ridden country of its many ills. The shape and size of a second bailout, whose planning can now begin, could become clear at a meeting on July 3 of euro zone finance ministers in Brussels.

Stock markets, which began rallying earlier in the day across Europe and much of Asia amid indications that the measures would be approved, moderated after the vote. Investors had feared that a collapse in Greece might have repercussions throughout the international financial system. Two other European Union countries — Ireland and Portugal — have also turned to international lenders for assistance.

Only one member of the ruling Socialist Party voted against the measure, and one opposition deputy voting crossed party lines to support the measure. (Five others voted present, and two members were absent.)