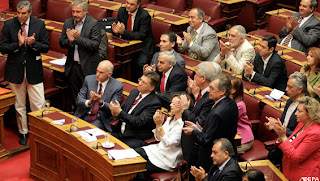 Greece has averted immediate economic disaster after its parliament voted in favour of fresh sweeping austerity measures demanded by the European Union and International Monetary Fund.

The socialist government of George Papandreou, prime minister, won approval for a €28bn ($40bn) package of tax increases and spending cuts by 155 votes to 138 with five abstentions. A defeat for the government could have led to Greece defaulting and thrown the future of the eurozone in doubt.

The vote followed a rowdy two-day debate in parliament and violent demonstrations in the centre of Athens. Mr Papandreou told deputies the IMF and EU were “investing in a new Greece, not the old one – one that we, too, have to believe in.” Without the package “Greece faces a grim future,” warned Evangelos Venizelos, finance minister. “We don’t have another choice . . . We have to stay in the euro.”

Earlier, George Provopoulos, the central bank governor, told the Financial Times that Greece would be committing “suicide” if parliament failed to back the measures.