Greek debt crisis - whose fault and whose problem? 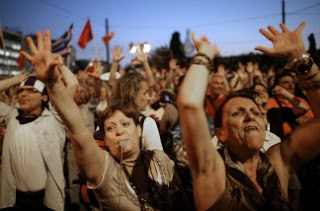 Ten hours of intense rioting outside of the parliament in Athens yesterday amplifies the critical juncture for Greece this week. Lawmakers there must vote on so-called austerity measures over the next two days as a condition for receiving another round of bailout funding from international creditors. The government will try to pass spending cuts and tax hikes for all. The alternative is the country falling into default on its debt. More than 50% of that debt is held by public institutions across Europe, according to research from Barclays Capital. What would a default mean for the Euro and countries across the European Union? Why is Greece struggling? What can rebuild its economy?

Yanis Varoufakis, Professor of Economic Theory at the University of Athens

Aristides Hatzis, Associate Professor of Philosophy of Law and Theory of Institutions at the University of Athens; author of the Greek Crisis blog