Greece's agony: What have we become? 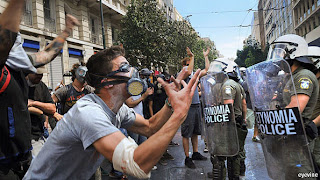 They had been warned. As Greece’s 300 legislators debated, and finally approved, an internationally backed financial-rescue plan with many clear downsides—it will pile pain onto hapless firms and citizens who already pay taxes, for instance, and so subsidise those who do not—some dire pronouncements on the possible consequences of saying “no” to the world were ringing in their ears.

A group of 18 Greek economists (mostly from the nation’s academic diaspora, in flight from the cronyism and disorder that mar campuses back home) listed some of the likely results if the country opted for autarky: in other words, if it stopped paying its debt and rejected the idea of moving, with foreign help, towards fiscal and administrative health. Public-sector wages would plunge, banks would crash, the country would be barred from world debt markets for years. Leaving the euro could cause hyperinflation.

Theodoros Pangalos, the famously blunt deputy prime minister, put it even more starkly. If Greece were to break with its would-be saviours and launch a new drachma, local banks would be besieged by panicked depositors and the army would have to keep order. “The shops will empty, and some people will jump out of windows,” he told El Mundo, a Spanish daily. (Last year Mr Pangalos irked some compatriots, and impressed others, by saying that ordinary Greeks, as well as the political elite, had wasted the loans and subsidies that rained down on the country: “We ate it up together.”)

Dire as these warnings sounded, this week the country still seemed finely balanced between those ready to embrace change and those who apparently dread it so much that they might bring the entire house down rather than risk any damage to their own interests. Alexis Papahelas, editor of Kathimerini, Greece’s newspaper of record, has coined the term “coalition of the unwilling” to describe the array of ultra-leftist and ultra-traditionalist forces bent on blocking reform. As he has noted, the number of citizens sullenly suspicious of all change may now increase, as middle-class Greeks see their hard-earned prosperity go up in smoke.