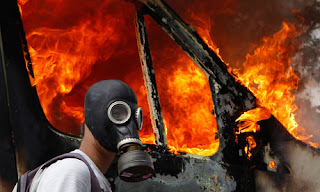 There is a ritual to Greek rallies. They start out quiet, then get rowdy, and then violent. this ritual jumped gear when violence broke out before the rowdy stage as thousands marched against austerity in Athens during a general strike triggered by tomorrow's parliamentary vote on some of the toughest economic measures in modern Greek history.

Witnesses said it began on Filellinon street just after midday. "Without any provocation riot police began firing off rounds of teargas," said Fotis Fieris, a student holding a handkerchief to his mouth. "They fired and fired until we had to disperse."

So ferocious was the volley that soon pungent smoke had wafted down through the alleys of Plaka, the ancient district beneath the Acropolis, sending teary-eyed tourists running for cover. By then, the action had moved to Syntagma Square, site of the Greek parliament and seat of the people's assembly, the body behind the growing movement of "indignant citizens" that has been the focus of protests for the past month.