Greece Struck Down by Strike 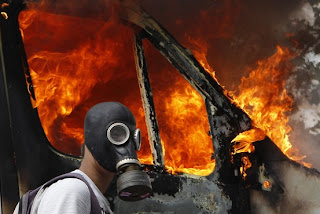 Greek police and hundreds of self-styled anarchist youths were fighting sporadic street battles around the main square in Athens Tuesday, just hours before the Greek parliament is due to resume debate on a controversial five-year austerity plan.

Rocks and broken glass littered the streets around the city's central Syntagma square, while clouds of teargas and smoke clouded the air forcing onlookers to don gasmasks and sending many demonstrators fleeing into nearby sidestreets.

The anarchists hurled petrol bombs, set fire to garbage bins and broke up paving stones which they used as projectiles to attack police. They also uprooted and set fire to several umbrellas at a sidewalk cafe, attacked the shop front window of a McDonald's restaurant and other shops, and then set fire to a television van parked on the south side of the square.

Police responded with repeated volleys of tear gas and stun grenades to disperse the anarchists. Police said that at least three officers were injured in the clashes, while Greek media reported that at least one bystander was also injured.