Greece pulls back from the brink

Greece has pulled back from the brink of default and averted a broader eurozone crisis after backing sweeping austerity measures in a knife-edge parliamentary vote.

George Papandreou, Greece’s socialist prime minister, won support on Wednesday for €28bn ($40.4bn) of tax increases and spending cuts, with just one of his party’s 155 parliamentary deputies voting against the package demanded by the European Union and International Monetary Fund.

Defeat could have resulted in the country being cut off from outside financial help – and in effect condemned to economic collapse. However, Mr Papandreou’s government faces a further vote on Thursday to secure fast-track implementation of the measures. Party officials expressed confidence that the boost to the government from Wednesday’s victory would help secure another victory – but a defeat could yet derail the country’s hopes of international aid.

Greece had taken “a vital step back – from the very grave scenario of default”, said José Manuel Barroso and Herman Van Rompuy, the European Union’s two presidents in a joint statement. However, they said a positive vote on Thursday was needed before Greece could receive further payments under a €110bn bail-out put in place last year and agreement was possible on a revised package – to be discussed by eurozone finance ministers on Sunday. 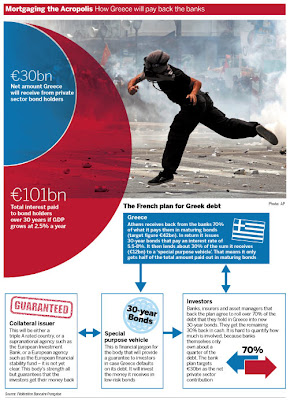