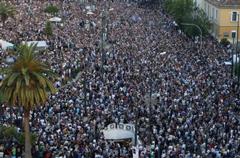 Greece appears to have agreed a tax cut with its international lenders, aimed at forging a broad consensus for more austerity to avoid a debt default, but the opposition said on Tuesday this would still not win its support.

International lenders are demanding that leading Greek political parties sign up to the government's latest austerity and reform drive to ensure that Greece keeps tackling its huge budget deficit for years to come, whoever is in power.

In Berlin, a German coalition source said European Union, IMF and ECB inspectors had struck a deal with the Socialist government on a value-added tax cut.

"They have agreed on it," the source said, following Athens newspaper reports that the "troika" team, which is scrutinizing Greek finances, had backed a reduction in VAT rates.