Greece Grinds to a Halt Amid General Strike 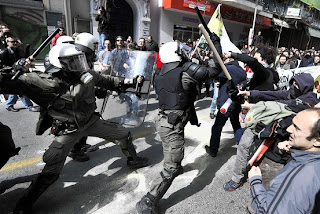 Flights were grounded and trains suspended amid a nationwide general strike Thursday, as Greek police fought running street battles with anarchist youths in fresh and violent signs of anger at the government's austerity plans.

Unions called a strike to protest wage and benefit cuts being put in place to trim Greece's swollen budget deficit as the country draws closer to a financial reckoning. An estimated 50,000 people took to the streets.

Greece must refinance a chunk of its giant debt next month, and Greek leaders are leaning hard on counterparts in richer European states to provide some measure of support that could ease those debt sales. Eyes are on European Union finance ministers' meetings early next week.

There were also separate clashes outside the Greek parliament, Agence France-Presse reported. Greece has a history of sometimes-violent anarchist protesters, though they are well outside the mainstream.

More
Posted by Yulie Foka-Kavalieraki at 10:02 AM