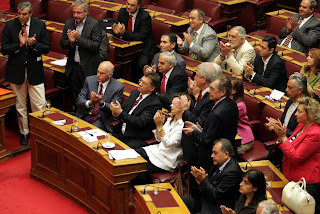 The Greek parliament on Wednesday passed a vital 28 billion euro austerity package, allowing the country to avoid immediate insolvency. Efforts to come up with a vast new bailout for Athens have also made progress this week.

European stocks began rising even before lunch. With Greek Prime Minister Giorgios Papandreou's socialists looking to have enough votes despite their razor-thin parliamentary majority, investors on Wednesday morning were betting against a Greek insolvency.

And lawmakers in Athens didn't disappoint. With 155 out of 300 parliamentarians voting "yes" to the €28 billion ($40 billion) package of spending cuts and tax increases over the next five years, the Papandreou government got the simple majority it needed. A second bill, related to the implementation of the cuts outlined in Wednesday's package, needs to pass on Thursday.

The passage of the belt-tightening measures was a critical step for Greece to avoid immediate insolvency. The European Union had made passage of the package of laws a condition for the release of the next €12 billion tranche from the €110 billion Greek bailout package passed last year. Without that money, Greece would have defaulted on its debt by mid-July.

Still, despite the high stakes, much of the conservative opposition rejected the bill. But with at least one conservative lawmaker voting in favor and a handful of abstentions, the opposition could only muster 138 "no" votes.