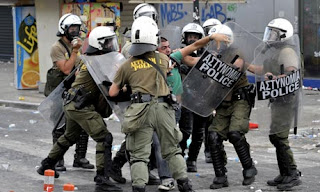 At first, Tuesday's meeting looked like a thousand other upmarket business events: suits gathered at Claridge's hotel in London's Mayfair for a day's discussion of how to reform Greece and its economy. But listening to the presentations from Greek ministers and officials about the airports, the ports, the land they were auctioning off to the highest bidder, the real purpose of the day came into sharp focus. Here, in an art deco room with five chandeliers and too many mirrored surfaces to count, was the beginning of a classy firesale.

The men from Athens were not calling it that, of course. "A professionally run privatisation plan" is how George Christodoulakis, the man in charge of Greece's asset sales, preferred to describe it. But even he conceded that the pace and the scale of the government's scheme to flog €50bn (£44.8bn) of assets within the next five years had been forced on it. "One can say: Is this the best time to sell assets?"

If the prime minister, George Papandreou, is to get the next slug of a loan from Europe and the IMF, he needs to get the parliament in Athens to agree to an unprecedented programme of spending cuts, tax rises and an auction of national assets. That fact was never openly acknowledged in the London summit of Greeks and foreign investors – but it was the drumbeat to all the lengthy sessions about privatising Greece's energy and motorways and the gambling industry. "In the middle of a crisis is always the opportunity for new investments," said Aris Syngros, executive chairman of the Invest in Greece campaign, from the stage. "The crisis gives the opportunity for big wins." The big wins, of course, would go to those who snapped up Greek assets at bargain prices.