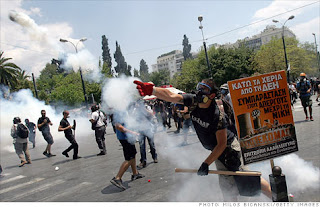 Riots have erupted in Athens once again, as the Greeks -- already burdened by the most severe austerity measures in Europe -- protest the next potential wave of belt-tightening in the ongoing debt crisis.

Greece is facing a terrible truth: In order to cut costs to get help in resolving the debt crisis, the nation desperately needs more of the austerity measures that have stifling its sluggish economy. Greece's Parliament will vote Wednesday on whether to adopt the new austerity measures.

"The Greeks are having an external austerity program rammed down their throats, and it's ultimately going to collapse the Greek economy," said Mark Blyth, professor of international political economics at the Watson Institute at Brown University in Providence, R.I. "In Greece, they're basically hacking themselves to pieces."

Desmond Lachman, resident fellow at the American Enterprise Institute for Public Policy Research and former policy adviser at the International Monetary Fund, said this is part of the Greek government's effort "to reduce their deficit from 15% of GDP to 3% of GDP in the space of three or four years."

"It's a huge fiscal adjustment," Lachman said. "Once they go into deep recession, they find they can't collect the taxes they thought they were going to collect. It's really an impossible exercise."