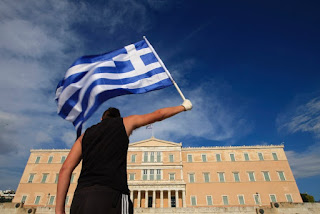 A new plan by French banks could lead to a breakthrough in efforts to create a second bailout for debt-stricken Greece after German banks also signaled their willingness to participate. German Finance Minister Wolfgang Schäuble has reportedly scheduled meetings with the country's top bankers to discuss the scheme.

The German government has repeatedly insisted that private investors must take part in further financial aid for Greece, a requirement that has been met with some resistance. But now a potential solution to the conflict has emerged. A number of media reports say that German banks are prepared to take part in a new "soft" debt restructuring plan by Paris aimed at encouraging private sector participation.

"The French proposal should form the basis for working out a German decision," an unnamed German Finance Ministry insider told news agency Reuters on Tuesday afternoon. Meanwhile Finance Minister Wolfgang Schäuble was expected to meet personally with leaders of the country's largest banks and insurers on Thursday to negotiate a plan.

According to the model proposed by French banks, which are among the most vulnerable to Greek debt, financial institutions would roll over some 50 percent of Greece's soon-to-mature bonds and invest in new bonds not set to mature for another 30 years. Some 20 percent would flow into a special fund secured by high-value securities.

The banks hope such a plan would encourage the private sector participation in a second Greek bailout , thought to be worth up to €120 billion, currently under negotiation. Though the plan would protect them from default losses should Greece become insolvent, daily Financial Times Deutschland reported late Tuesday that it remains unclear whether the German banks would accept the period of 30 years for the new bond issues. Alternatively a number of special purpose entities could be established for parallel security.