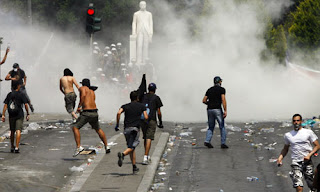 While Greece erupted in protest again, representatives of the country's government were at Claridge's hotel trying to drum up international investors' interest in a "fire sale" of its national assets.

The private equity bosses gathered in the hotel's ballroom for the parade of Greece's national treasures showed little interest in buying anything.

Nikos Stathopoulous, managing partner of BC Partners, which has invested more than €3.5bn in Greece, said investors are put off by bureaucracy, strong unions, corruption and a lack of transparency. "Even in the good times Greece is not a country that attracts investment. Foreign investors don't want to invest in a country where there is no flexibility in hiring and firing people," he said. "You don't want to invest in a country in which you wake up and a new law has been passed which totally undermines and destroys the value of the investment you've just made."