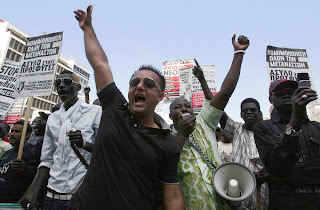 Manolis Kandaris' wife was in labor and he wanted to get her to a hospital, fast. So he reached for the car keys, fetched the video camera and dashed out to get his clunky Citroen running.

He never made it.

As he sprinted to the car, muggers attacked him about a block from his apartment. And when he resisted their attempts to wrench the camera from him, the 44-year-old pharmaceuticals executive was stabbed to death.

His wife found him lying in a pool of blood as she hobbled to the car with the help of her mother. She was taken to a maternity ward; he was taken to the morgue.

Long prided as one of Europe's safest capitals, this ancient metropolis is cowering in the shadow of harrowing crimes and lawless rampages.

Within 24 hours of the Kandaris killing, a 21-year-old man from Bangladesh was stabbed to death in what police suspect was a revenge killing. The following day, mobs of ultranationalist youths bolted through the center of Athens, battering scores of illegal immigrants. Three days later, masked youths enraged by a police beating firebombed a precinct in downtown Athens, critically injuring two men and a 55-year-old female flower seller.

"It never used to be this way," said Ioannis Makris, president of the Athens police union. "We're seeing a lot of rage as a result of the financial crisis, a lot of desperate people resorting to fistfights, not to mention gunfire and stabbings, for trite causes."