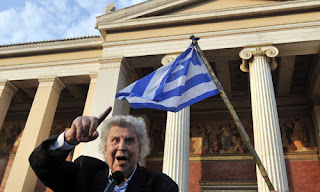 European leaders appear to have agreed that Greece can cut its VAT rate in a move designed to win support for more public spending cuts as the embattled nation prepares for a crunch decision on a second international bailout.

Athens was offered the VAT olive branch in a last-ditch effort to win over conservative opposition, which has been demanding tax cuts as the price for agreeing to further EU loans. It believes tax cuts will encourage businesses to expand and help the economy grow.

After several days of wrangling, a German source said the so-called troika team of EU, IMF and European central bank inspectors had struck a deal with the socialist government on VAT cuts as part of a wider agreement that Athens will reduce its debts to below 3% of GDP by 2014. "They have agreed on it," the source said. A deal is expected in the next few days, before an EU finance ministers meeting at the end of June.

However, political agreement remained elusive after the opposition Democracy party warned that it wanted more than a VAT cut. A party official said: "If correct, it is a good step, but not good enough; it is not sufficient to restart the economy."